This 'Universal Club 2' is really a bike to fall in love with. The barn-fresh condition is irresistable. It shows its past, with spokes that have rusted through or almost rusted through. Some are only 1 mm thick, which is less than half the original size.
Current owner decided to keep it as original as possible: no new paint, no replacement of rusty parts. He just restores/ replaces the parts that are necessary to make it run again.

Serial number is 46623, wheel size 52 inch. It was built approximately in 1885-86. The 1884 model didn't have ball bearings on the rear hub yet.
There is no brake lever with the bike, but this is exactly the same as the one on the 'Special Club'.

In this series you will also find pictures of a restored example of this Universal Club (courtesy Robert Sterba) and a giant 58 inch Universal Club in original paint - missing some parts. 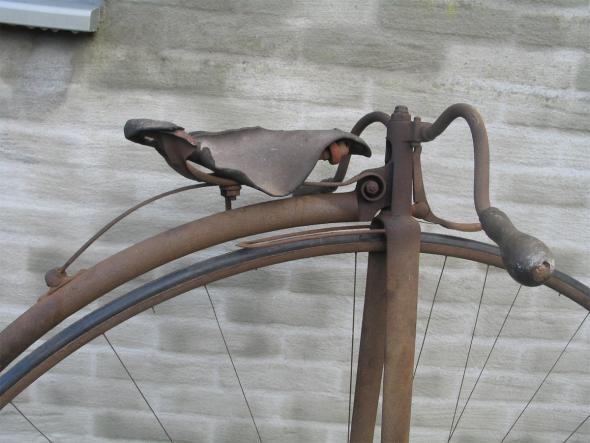